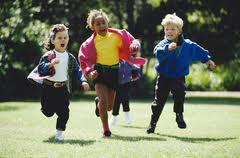 Object Run Fitness Game of the Month
With the weather still warm, there is still time to get outside and play!

Object Run is a simple game that requires no equipment.   It is best played in a park, but can be played on a safe, city block.  It can be played alone or with a small group of friends.

2.  Pick an object to run to.  For example, another park bench or tree.  Make sure it is at least 100 feet away so you can challenge yourself.

3.  Once you reach the object stop and do 10 hops on your left foot.  Once you have finished hopping pick another object to run to.  When you’ve arrived at the second object hop 10 times on your right foot.

4.  Continue playing until you have reached 10 different objects.

Now that you’ve learned Object Run, get outside and play!

Transform your child’s physical and mental health with Energetic Juniors